Women, Human ? Are You kidding ? 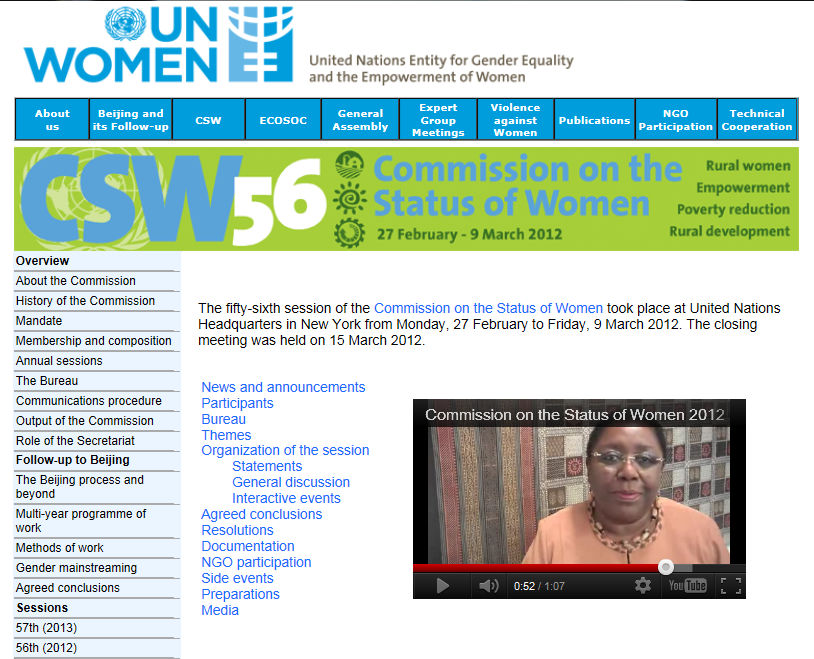 The fifty-sixth session of the Commission on the Status of Women took place at United Nations Headquarters in New York from Monday, 27 February to Friday, 9 March 2012. The closing meeting was held on 15 March 2012.

The UN Commission on the Status of Women failed to adopt agreed conclusions at its 56th session on the basis of safeguarding « traditional values » at the expense of human rights and fundamental freedoms of women.

Together with our partner feminist and women’s rights organisations, we say NO to any re-opening of negotiations on the already established international agreements on women s human rights and call on all governments to demonstrate their commitments to promote, protect and fulfill human rights and fundamental freedoms of women.

We have outlined our concerns in the statement below, which will be submitted to UN Member States, CSW and other relevant UN human rights and development entities.

Thank you for your support.

Women Living under Muslim Laws/ Violence is not our Culture Campaign

We, the undersigned organisations and individuals across the globe, are alarmed and disappointed that the United Nations Commission on the Status of Women (CSW) failed to adopt agreed conclusions at its 56th session. This failure has diminished the considerable work, energy, time and costs that women all over the world invested on the 56th session of the CSW. The advancement of women s human rights should not be put on hold because of political battles between states. We say NO to any re-opening of negotiations on the already established international agreements on women s human rights and call on all governments to demonstrate their commitments to promote, protect and fulfill human rights and fundamental freedoms of women.

We are particularly concerned to learn that our governments failed to reach a consensus on the basis of safeguarding traditional values at the expense of human rights and fundamental freedoms of women. We remind governments that all Member States of the United Nations (UN) have accepted that the human rights of women and of the girl-child are an inalienable, integral and individual part of universal human rights as adopted by the 1993 World Conference on Human Rights in Vienna. Governments must not condone any tradition, cultural or religious arguments which deny human rights and fundamental freedoms of any person. After more than 60 years since the Universal Declaration of Human Rights (UDHR) was embraced and adopted by the UN, the relationship between traditional values and human rights remains highly contested. We affirm the UDHR as not only a common standard of achievement for all peoples and all nations but a common standard of assessment for all traditional values. The UDHR is an embodiment of positive traditional values that are universally held by this community of nations and are consistent with the inherent dignity of all human beings. We remind governments that under the Charter of the United Nations, gender equality has been proclaimed as a fundamental human right. States cannot contravene the UN Charter by enacting or enforcing discriminatory laws directly or through religious courts nor can allow any other private actors or groups imposing their religious fundamentalist agenda in violation of the UN Charter.

No one may invoke cultural diversity to infringe upon human rights guaranteed by international law, nor limit their scope. Not all cultural practices accord with international human rights law and, although it is not always easy to identify exactly which cultural practices may be contrary to human rights, the endeavour always must be to modify and/or discard all practices pursued in the name of culture that impede the enjoyment of human rights by any individual. (Statement by Ms. Farida Shaheed, the Independent Expert in the field of cultural rights, to the Human Rights Council at its 14th session 31 May 2010).

Amongst other things, it is alarming that some governments have evoked so-called moral values to deny women s sexual and reproductive health and rights. Sexual and reproductive rights are a crucial and fundamental part of women s full enjoyment of all rights as well as integral to gender equality, development and social justice. Social and religious morals and patriarchal values have been employed to justify violations against women. Violence against women, coercion and deprivation of legal and other protections of women, marital rape, honour crimes, son preference, female genital mutilation, dowry or bride price , forced and early marriages and corrective rapes of lesbians, bisexuals, transgender and inter-sexed persons have all been justified by reference to traditional values .

We remind governments that the CSW is the principal global policy-making body dedicated exclusively to gender equality and advancement of women with the sole aim of promoting women s rights in political, economic, civil, social and educational fields. Its mandate is to ensure the full implementation of existing international agreements on women s human rights and gender equality as enshrined in the Convention on the Elimination of All Forms of Discrimination Against Women, the Vienna Declaration and Programme of Action, the Declaration on the Elimination of Violence against Women, the Beijing Declaration and Platform for Action and the International Conference on Population and Development Programme of Action as well as other international humanitarian and human rights law.

We strongly demand all governments and the international community to reject any attempt to invoke traditional values or morals to infringe upon human rights guaranteed by international law, nor to limit their scope. Customs, tradition or religious considerations must not be tolerated to justify discrimination and violence against women and girls whether committed by State authorities or by non-state actors. In particular, we urge governments to ensure that the health and human rights of girls and women are secured and reaffirmed at the coming Commission on Population and Development and the International Conference on Sustainable Development (Rio+20). Any future international negotiations must move forward implementation of policies and programmes that secure the human rights of girls and women.

We call upon the member states of the UN and the various UN human rights and development entities to recognise and support the important role of women s groups and organisations working at the forefront of challenging traditional values and practices that are intolerant to fundamental human rights norms, standards and principles.