About prostitution, I can’t bear anymore these expressions made from :

1) Prostitution is not « sex », it’s not a sexual practice where the money could be a fantasy … it’s violence. Money is real, it’s the reason why the woman “consents” to what is done to her.
Prostitution is sex only for men. Seeing prostitution as a form of sexuality is the point of view of the rapist (he desires what happens, and he enjoys it). From the point of view of the woman, it’s sexual violence (threat, brutality, painful practices, forced invasions …). Consent is not the expression of freedom (free choice, free sexuality) because it has never been the expression of desire. Consent is surrender.

2) If it’s violence, what characterizes prostitution is not the exchange of money. a) The problem is not the business. Would you describe a genocide as a « bone trade ? »; or colonization as a “cultural trade”? Where lies the ethical, political and legal emergency ? in exploitation or in destruction of human beings ? And when these humans are targeted because of a condition of birth, is it exploitation or an act of genocide? b) It’s a business for men. Not for women. Prostituted women become poorer and poorer. That’s what keeps them into rape-trade. Men are the economic agent. Defining and explaining prostitution, as a political phenomenon, by economic logic is pure mansplaining. 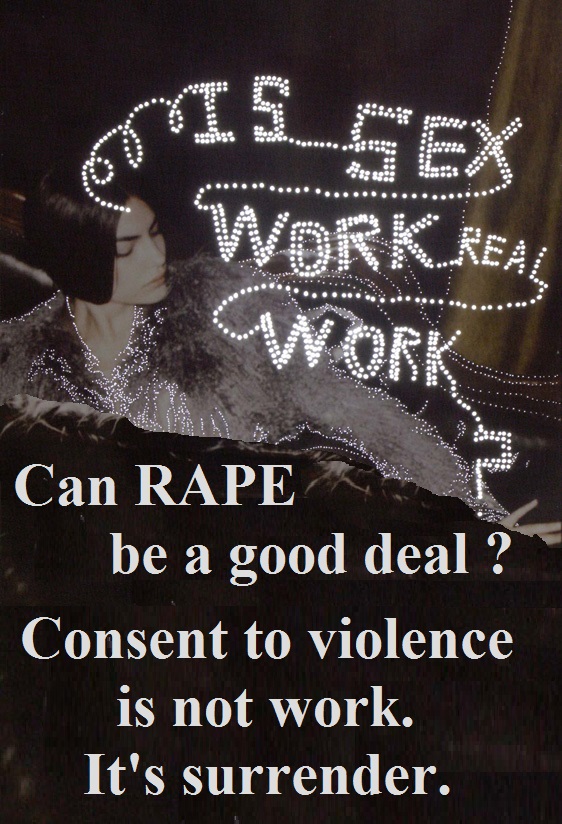 Prostitution is not exploitation, the « big deal » is not a trade! It’s a system of crimes against women & girls. And one of these abuses consists in turning it into business. Organizing prostitution is selling to other aggressors the right to commit these crimes.

Money is not the reason why « women get into prostitution ». Because prostitution is a system of rape where NO WOMEN IS THE AGENT. Women do not prostitute themselves. Men, at global level, and most of the time at a local level, prostitute women. They buy rape, they sell it, and by raping and selling their own daughter, wife or by kidnapping strangers, they impose the laws of supply and demand. Women are not « prostituted » (adjective), they are prostituted by men (past participle). Because MEN ARE THE REAL ECONOMIC AGENT of rape trade. So the reason why « women get into prostitution » is male sexual violence, deeply linked with economic violence (monopoly of resources, exploitation, direct or indirect robbery).

As a consequence, « crisis » is not a cause of women’s prostitution. Not in a direct economic logic … People explain the explosion of rape industry during capitalist crisis by saying : « In crisis, women need money, so THEY get into prostitution ». I repeat, women are not the economic agent of rape-trade. « Capitalist crisis » means that dominant monopolize resources, and oppressed people are more oppressed. So men, as a dominant class, monopolize remaining resources (money, housing, etc.) so they can reinforce their sexual violence, their rape industries, and their marital business (domestic slavery and marital rape, domestic violence and incest which lead victims to prostitution).

Talking about prostitution, is talking about systematic organization of rape and male sadism. 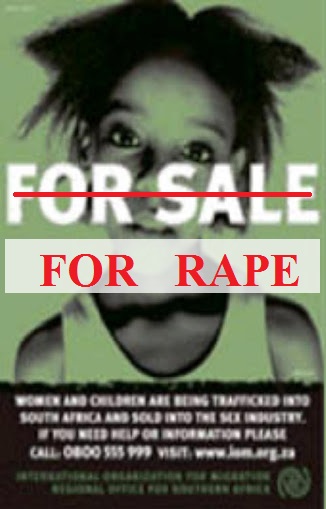 It’s not a big fraud. Women don’t feel robbed and men don’t steal the “value of a service”; they don’t even steal the “sexuality” of their victims (sexuality is not a service nor a raw material which could be extracted out of the person).

But the fact is that women are NOT really commodities! A human can’t be bought and sold and if she is, it’s not business, it’s a crime against her humanity. When a group of persons estimate the price of someone’s integrity or someone’s life, it’s not a valuation; it’s an act of torture and dehumanization. When these criminals estimate the victim because of a condition of birth, they do not estimate her use/exchange value, they commit an act of genocide.

Prostitution is an organized crime against women.
It’s one of the biggest organizations of crimes against humanity.