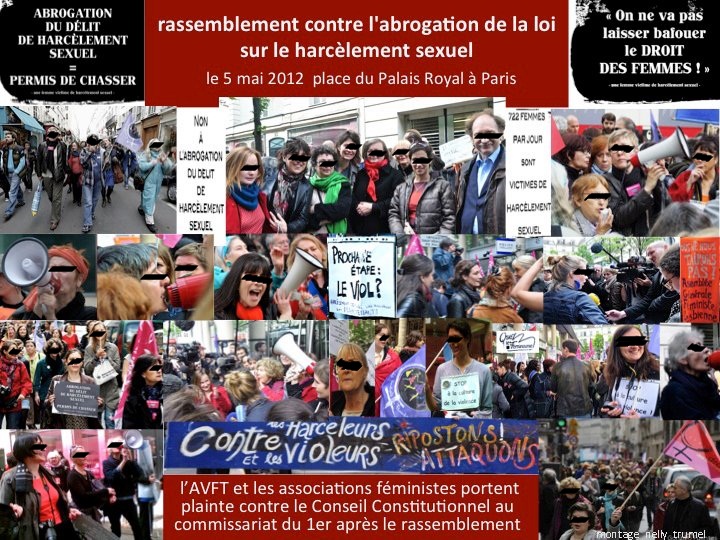 Men usually make the law for themselves, and apply it at their whim. They especially decide not to apply them when it comes to the laws that were written at feminists’ demand to protect us from male violence.  And when they find out that they can’t skip the law so easily after all, well, one of the guys only has to lift a finger to change it or get rid of it, so to reestablish unconditional impunity.

Since a French law against sexual harassment was passed in 1992 (modeled on the US law that was pushed through by Catharine MacKinnon) the European association against sexual violence against women at work (AVFT)[1], based in Paris, has been relentlessly fighting for the past 20 years to get the law redefined because it didn’t do justice to victims and was almost useless in punishing the abusers. Cases were almost systematically dropped, the law was generally used as a way to downgrade greater crimes or offenses such as rapes or sexual assaults and the imprecision of the law allowed its application to be very restrictive, which made it difficult if not impossible to recognize most of what constituted sexual harassment in the first place (in particular verbal “propositions”, comments on body, demeaning sexualized language, non-verbal actions such as mimicking sexual acts, imposing pornographic images and physical gestures such as touching the hair, legs, waist, or imposing massages, etc.)[2]

Now, former secretary of the state and former MP, Gérard Ducray, after being condemned for sexual harassment in 2011 (in fact a sexual assault downgraded into sexual harassment by the court), unhappy about being punished for what he called “attitudes of seduction”, has appealed the decision of the court and showed up to some of his pals at the constitutional council (C.C.)[3] to demand an immediate abrogation, on the grounds that the imprecision gave way to unjustly condemning “admissible flirting”[4].  His demand was judged serious enough to be transmitted to the C.C. in February 2012.

The AVFT, which intervenes as civil party for hundreds of victims of sexual harassment every year, knows for a fact that the exact opposite is true: the law has been more helpful in protecting the harassers than the victims. Also, Marilyn Baldec, delegate for the AVFT, warned that “the immediate abrogation would result in the nullification of all procedures in course while creating a judicial void for the victims and guaranteeing total impunity for the harassers”.[5]

So, what did the constitutional council decide to do? Well, abrogate the law! The decision took force last Friday, May the 4th.

The clique (er , C.C., aka the “sages”) who stood up like one single man to support their poor persecuted pal: not many women in there.

What a highly specialized, competent judicial European-level organization never achieved in twenty years of lobbying and in the name of thousands if not millions of women, one single man, in less than a year and after being condemned for sexual harassment – managed to abrogate the law, just because he said so. No years of lobbying, no endless demonstrations needed!

Now, although this outcome may have been predictable, you can bet that many of us feminists were furious. This meant a backlash in 20 years in terms of protection of women from male violence at work and also meant sending a grand message of impunity to all harassers and abusers of France.

This is what the news represented for some of the victims who now face an abysmal judicial void: (testimonies collected by the AVFT)[6]:

“We talk about license to kill, well – this is a real license to hunt”

“What’s sage about them apart from the title?”

“What am I going to do now, I’ve lost everything. My harasser is strutting about since this morning, I’ve just understood why, it’s horrible”

“I feel emptied; I came to France because I thought women were protected here”

“I’m not revolted, I feel sick, I’ve been fighting 5 years for nothing”.

“I think there are no words to define what this judicial void means to me, we think things evolve at least a bit but then we get a massive slap in the face with this violent backlash, long live France, I’m sorry for myself and for all women”

“I’m ashamed of my country”

“It’s as if nothing existed, everything is nullified”

“It can’t be possible!! So then what? Are we clearly saying to men, to bosses etc, come on guys grope me it’s allowed by the law”

“I have a feeling of hate and revolt, it hurts, it’s a whole part of my life that’s going to vanish, I might as well do justice by myself, I had to put up my own business and work for myself so to avoid men, I’m shocked, I don’t know what to say anymore, it really hurts”

“I’m not well, I’m panicking; he must be having fun with his friends right now”

“I was on the verge of suicide”

“I imagined him jubilating, it was unbearable”

Immediately after the abrogation, the AVFT and other organizations (World March of Women, Femmes Solidaires and the National Collective for Women’s Rights (CNDF)) called for a demonstration the following day, Saturday March the 5th in Paris at 11 am. Around 300 feminists gathered that morning. Just before the end of the demonstration though, the group was still so full of anger that they decided to march off to the nearest police station to file a complaint against the president of the constitutional council, Jean-Louis Debré, for the motive of deliberately putting victims in danger and disrupting public order. Four women representatives of the organizations went in the police office and meanwhile they could hear the others waiting outside, shouting slogans against rape at the entrance of the police station.

Here’s a video of the women coming out of the police station brandishing a copy of the complaint: it was all very moving (video in French):

A copy of the complaint can be found here.

While as a radical feminist, one can debate as to whether asking men to ‘please stop raping and please write laws so you could stop raping’ is an efficient way to bring down men’s dominance over women, collective acts of revolt that directly attack a powerful man in a powerful institution in the name of thousands of women and against men’s sexual violence are inspiring and invigorating.  It sends the hopeful message that feminism hasn’t completely been requisitioned by men and their slutified, perverse repackaging of patriarchal ideologies they relentlessly promote to women through their media.

Perhaps more importantly, and this is where radical feminism can and should be used to inform any pro-woman political platform, the use of explicit language detailing the horrors men perpetrate on women and the consequences of this to girls and women — and eschewing euphemisms and male-centric issue framing that fail to name the agent of harm — is known to create mutual knowledge, which leads to collective power to challenge dominance.

Together we can confront male power and make it fun, and using the principles of radical feminism, specifically explicit language, we might actually be successful in challenging male supremacy.

[4] http://www.avft.org/article.php?id_article=623: “sexual harassment: 20 years after the law, the offense could be abrogated”, April 2012, a press release by Marilyn Baldec, delegate for the AVFT.

[5] http://www.avft.org/article.php?id_article=623: “sexual harassment: 20 years after the law, the offense could be abrogated”, April 2012, a press release by Marilyn Baldec, delegate for the AVFT.