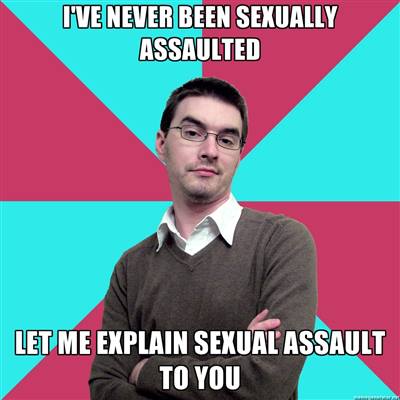 Q: « what is rape culture? I’VE never heard of it! »
A: rape culture is when women live in fear of being raped or assaulted by men, experience these assaults, and still accept the myth that violence against women is « rare » in order to keep men happy.

Q: « I understand what you say, and i would agree if … but dammit, why are you so agressive ? » // « why do you hate men so much? »
A: why are you substituting the word rapist with man?

Q: « it’s just a joke. get over it, men aren’t going to go out and rape women because of sexist jokes. »
A: false. there are numerous studies showing that this is not the truth. exposure to sexist « jokes », misogyny in the media, and anti-woman attitudes makes men feel more comfortable blaming women for rape.

Q: « telling men not to rape women isn’t going to stop anything. women need to learn self defense, and take precautions wherever they go. »
A: learning self defense doesn’t prevent men from making the conscious decision to rape, rapists are perfectly capable of researching women’s self defense, and targeting men has already been shown to work. rape is about control, and so is placing the responsibility to prevent it on women.