the masculinist propaganda in Twilight, written by the mormon Stephenie Meyer

According to the National Domestic Violence hotline, these are some signs that you may be in an emotionally or physically abusive relationship.

* Look at you or act in ways that scare you?
Check.

* Control what you do, who you see or talk to or where you go?
« Stay away from the werewolves. I love you. »

* Make all of the decisions?
Check.

* Act like the abuse is no big deal, it’s your fault, or even deny doing it?
« If I wasn’t so attracted to you, I wouldn’t have to break up with you. »

* Threaten to commit suicide?
« I just can’t live without you. In fact, I’ll run to Italy and try suicide by vampire if anything happens to you. »

* Threaten to kill you?
On their first date.
These are some more signs of an abusive relationship.
Has your partner…

* Tried to isolate you from family or friends.
Bella doesn’t have time for anyone else!

* Pushed, slapped, bitten, kicked or choked you.
Does tossing her through a glass table count?

* Abandoned you in a dangerous or unfamiliar place.
« We’re breaking up. And I’m leaving you in the forest. »

* Scared you by driving recklessly.
Check.

* Forced you to leave your home.
She had to run away with him to flee from the other vampires in the first movie, and she had to drop everything and run to Italy in the second.

* Prevented you from calling police or seeking medical attention.
Check. Even in the hospital, nothing is a big deal.

* Views women as objects and believes in rigid gender roles.
Well, they are Mormon… (I know, I know, cheap shot.)

* Accuses you of cheating or is often jealous of your outside relationships.
Check, wolf-boy. 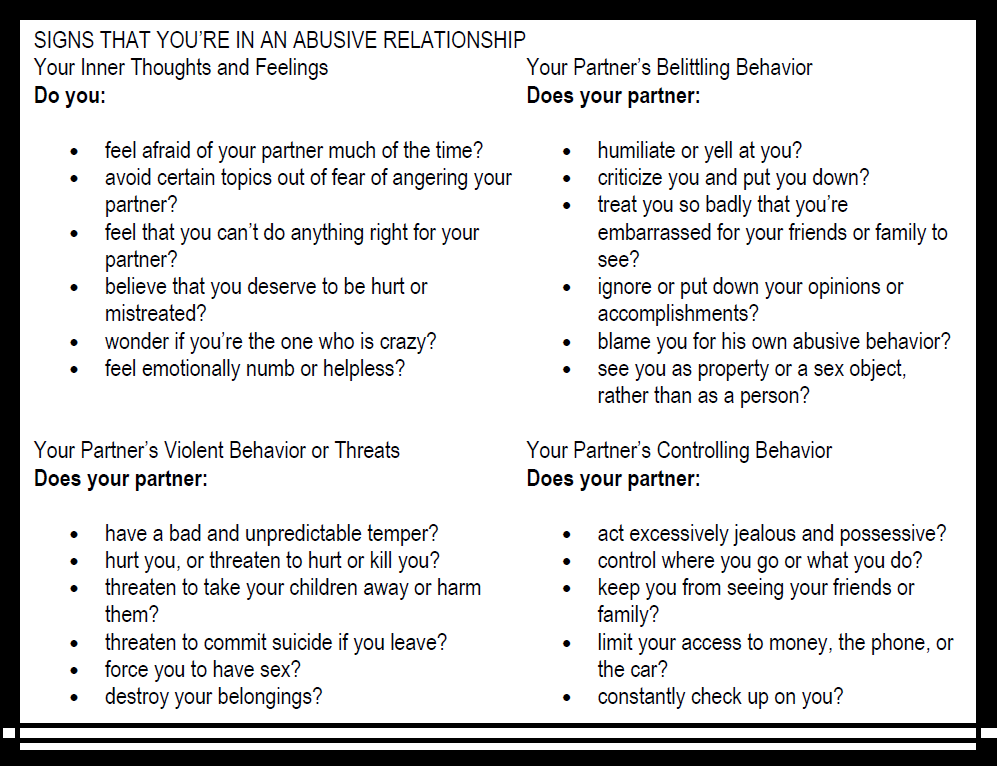 According to the NDVH, « If you answered ‘yes’ to even one of these questions, you may be in an abusive relationship. » This list is fifteen.